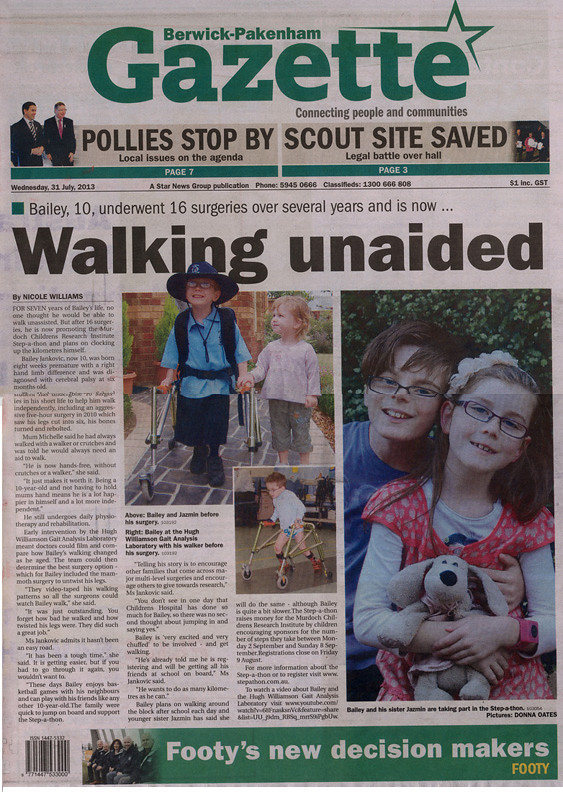 FOR SEVEN years of Bailey’s life, no one thought he would be able to walk unassisted. But after 16 surgeries, he is now promoting the Murdoch Childrens Research Institute Step-a-thon and plans on clocking up the kilometres himself.

The Harkaway Primary School student has undergone 16 surgeries in his short life to help him walk independently, including an aggressive five-hour surgery in 2010 which saw his legs cut into six, his bones turned and rebolted.

Mum Michelle said he had always walked with a walker or crutches and was told he would always need an aid to walk.
“He is now hands-free, without crutches or a walker,” she said.

“It just makes it worth it. Being a 10-year-old and not having to hold mums hand means he is a lot happier in himself and a lot more independent.”

Early intervention by the Hugh Williamson Gait Analysis Laboratory meant doctors could film and compare how Bailey’s walking changed as he aged.

The team could then determine the best surgery option – which for Bailey included the mammoth surgery to untwist his legs.

“They video-taped his walking patterns so all the surgeons could watch Bailey walk,” she said.

“It was just outstanding. You forget how bad he walked and how twisted his legs were. They did such a great job.”

Ms Jankovic admits it hasn’t been an easy road.

“It has been a tough time,” she said.

“It is getting easier, but if you had to go through it again, you wouldn’t want to.

“These days Bailey enjoys basketball games with his neighbours and can play with his friends like any other 10-year-old.The family were quick to jump on board and support the Step-a-thon.

“Telling his story is to encourage other families that come across major multi-level surgeries and encourage others to give towards research,” Ms Jankovic said.”You don’t see in one day that Childrens Hospital has done so much for Bailey, so there was no second thought about jumping in and saying yes.”

Bailey is ’very excited and very chuffed’ to be involved – and get walking.

“He’s already told me he is registering and will be getting all his friends at school on board,” Ms Jankovic said.
“He wants to do as many kilometres as he can.”

Bailey plans on walking around the block after school each day and younger sister Jazmin has said she will do the same – although Bailey is quite a bit slower.The Step-a-thon raises money for the Murdoch Childrens Research Institute by children encouraging sponsors for the number of steps they take between Monday 2 September and Sunday 8 September.Registrations close on Friday 9 August.
For more information about the Step-a-thon or to register visit www.stepathon.com.au.